Haiti Clean Water Board of Directors 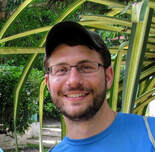 Vince Basile lives in Wyandotte, Michigan with his wife Amy and children Hannah and Kal-el.  They are active        members of Bethel Baptist Church in Southgate, Michigan.  Vince has served in various roles at the church.
Vince received a Bachelors of Science from Michigan State University.  He works at NSF International in Ann Arbor as a senior chemist, testing drinking water.  He serves on the Executive Committee of ABC-Mi and Region Board as chairperson of the Congregational Ministries and Mission Team.
Vince has been serving in Haiti on an almost yearly basis since 2011 on short term mission trips.  He has led and co-led teams in Haiti.  Since Haiti Clean Water began, he has been able to install many filters with the Haitian team and introduce the project to new members of mission teams.  Vince has also organized and lead youth mission trips to Grand Rapids, Michigan and Kenosha, Wisconsin.

​​Ralph Brown lives in Harrietta, MI with his beautiful wife and his dog Charlie Brown, a very cute beagle who is not spoiled at all. He has 2 grown children. His daughter, Desiree, works for Kensington Church in Traverse City Mi as their children’s director. His son Benjamin lives in Laramie WY, where he is attending college to be a teacher. Benjamin also spent 4 years in the Air Force prior to going to college. Ralph is a veteran of the United States Army Reserve. He currently drives truck for Estes Express Lines.
He made his first trip to Haiti in 2020 which was an incredible experience. His eyes were opened to how bad their water really is. No one can grasp how bad the water situation is in Haiti until you see it in person.
He is committed to Haiti Clean Water because the people in Haiti are awesome and loving. They need organizations like Haiti Clean Water to help them access clean water. They do not receive any government help.

Lynne Punnett lives in Tecumseh, Michigan with her husband Rick. Lynne and Rick are active members of First Baptist Church of Ypsilanti where Lynne serves as an Elder. They have three grown children and two grandchildren and look forward to retirement in a few years.
After working in the newspaper publishing industry for 23 years, Lynne’s work with non-profits began with the American Red Cross and later Habitat for Humanity, where she and her husband volunteered for years before she joined the staff. For 12 years she served with Affiliates in southeastern Michigan, the last eight years as Executive Director of Habitat for Humanity of Lenawee County. She retired in June of 2020 and has continued to advocate for affordable housing and on behalf of people experiencing housing crisis and homelessness, serving on several boards and committees in Lenawee County.
Lynne also serves with the American Baptist Churches of Michigan as Region Mission Consultant. She works with ABC churches all over Michigan to encourage and assist people who want to participate in a short term mission trip anywhere but most often Lynne helps teams
travel to Haiti and most recently to Puerto Rico, helping to make connections in support of our ABC missionaries. She and her husband own a construction company. They led six teams over five years to help rebuild the Gulf coast following hurricanes Katrina, Rita and Wilma and Lynne has now traveled to Haiti with 14 different teams since 2011. In January 2020, She joined her daughter and Habitat for Humanity Portland (Oregon) on a Global Village mission trip to Ethiopia where they built homes for Habitat families in the Addis Ababa area.
Lynne grew up in the beautiful Pacific northwest where she first attended College of the Redwoods. After moving to Michigan and experiencing a successful career, she completed a BBA in Business Management at Cleary University in Ann Arbor.

​Lynn Ross lives in Cadillac Michigan with her husband Bill. They are the parents of three grown sons, three daughters-in-law and five grandchildren. They are members of First Baptist Church Cadillac.
Lynn received a degree from Central Michigan University in education. Her past work experience includes Manton City Treasurer, a retail bookkeeper, Family Independence Specialist for the Michigan Department of Health and Human Services and manager of the Social Security Administration’s Work Incentives Planning and Assistance grant for United Cerebral Palsy of Michigan. She is now retired.
Lynn has been traveling to Haiti 1-2 times a year since 2012. She was part of the group that started Haiti Clean Water in 2014 and remains committed to bringing clean drinking water to Northern Haiti. 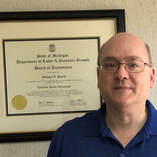 Michael Smith lives in Cadillac Michigan with his wife Kimberly. They are the parents of two daughters. They are members of First Baptist Church Cadillac.​
Michael received a master’s degree from Grand Valley State University in business. Michael achieved the certified public accountant designation in 2006. His past work experience includes auditing local governmental units, tax preparation, accounting, bookkeeping, and payroll preparation. Michael is currently self-employed in Cadillac, Michigan as a certified public accountant and volunteers with several local non-profit organizations.
Michael supports the efforts of Haiti Clean Water from the United States and remains committed to bringing clean drinking water to Northern Haiti.

Woody Wright
I am a Wisconsin Badger and a Methodist.   I came to Michigan when I was 18,  and got an Engineering Education at General Motors Institute and the University of Buffalo.   My wife Nancy and I were married for 58 years before she passed away.   I have lived in Flint and Flushing Michigan, Ridgewood New Jersey, Antwerp, Belgium, Zaragoza, Spain, and now reside in Elk Rapids, Michigan.  I had a 34 year career with General Motors building plants and equipment, and managing organizations.
I am active in the Kewadin United Methodist Church, including as Treasurer.  I am also involved in other volunteer activities in the greater Traverse City area.
I went on the 2020 Mission Trip to Cap Haitien, and that experience showed me the benefits to the Haitian people of the important work we are doing.
https://www.paypal.com/cgi-bin/webscr?cmd=_donations&business=haiticleanwater@gmail.com&lc=US&no_note=0&item_name=Providing +Clean+Water+to+people+in+Northern+Haiti+(idg4973)&cn=&curency_code=USD&bn=PP-DonationsBF:btn_donateCC_LG.gif:NonHosted